The United States has one of the safest water supplies in the world. However, national statistics don’t tell you specifically about the quality and safety of the water coming out of your tap. That’s because drinking water quality varies from place to place, depending on the condition of the source water from which it is drawn and the treatment it receives. Now you have a new way to find information about your drinking water, if it comes from a public water supplier (EPA doesn’t regulate private wells, but recommends that well owners have their water tested annually). Starting in 1999, every community water supplier must provide an annual report (sometimes called a consumer confidence report) to its customers. The report provides information on your local drinking water quality, including the waters source, the contaminants found in the water, and how consumers can get involved in protecting drinking water. You may want more information, or have more questions. One place you can go is to your water supplier, who is best equipped to answer questions about your specific water supply.

What contaminants may be found in drinking water?

There is no such thing as naturally pure water. In nature, all water contains some impurities. As water flows in streams, sits in lakes, and filters through layers of soil and rock in the ground, it dissolves or absorbs the substances that it touches. Some of these substances are harmless. In fact, some people prefer mineral water precisely because minerals give it an appealing taste. However, at certain levels, minerals, just like man-made chemicals, are considered contaminants that can make water unpalatable or even unsafe. Some contaminants come from erosion of natural rock formations. Other contaminants are substances discharged from factories, applied to farmlands, or used by consumers in their homes and yards. Sources of contaminants might be in your neighborhood or might be many miles away. Your local water quality report tells which contaminants are in your drinking water, the levels at which they were found, and the actual or likely source of each contaminant. Some ground water systems have established wellhead protection programs to prevent substances from contaminating their wells. Similarly, some surface water systems protect the watershed around their reservoir to prevent contamination. Right now, states and water suppliers are working systematically to assess every source of drinking water and to identify potential sources of contaminants. This process will help communities to protect their drinking water supplies from contamination.

Where does drinking water come from?

A clean, constant supply of drinking water is essential to every community. People in large cities frequently drink water that comes from surface water sources, such as lakes, rivers, and reservoirs. Sometimes these sources are close to the community. Other times, drinking water suppliers get their water from sources many miles away. In either case, when you think about where your drinking water comes from, its important to consider not just the part of the river or lake that you can see, but the entire watershed. The watershed is the land area over which water flows into the river, lake, or reservoir. In rural areas, people are more likely to drink ground water that was pumped from a well. These wells tap into aquifers, the natural reservoirs under the earths surface, that may be only a few miles wide, or may span the borders of many states. As with surface water, it is important to remember that activities many miles away from you may affect the quality of ground water. Your annual drinking water quality report will tell you where your water supplier gets your water.

How is drinking water treated?

When a water supplier takes untreated water from a river or reservoir, the water often contains dirt and tiny pieces of leaves and other organic matter, as well as trace amounts of certain contaminants. When it gets to the treatment plant, water suppliers often add chemicals called coagulants to the water. These act on the water as it flows very slowly through tanks so that the dirt and other contaminants form clumps that settle to the bottom. Usually, this water then flows through a filter for removal of the smallest contaminants like viruses and Giardia. Most ground water is naturally filtered as it passes through layers of the earth into underground reservoirs known as aquifers. Water that suppliers pump from wells generally contains less organic material than surface water and may not need to go through any or all of the treatments described in the previous paragraph. The quality of the water will depend on local conditions. The most common drinking water treatment, considered by many to be one of the most important scientific advances of the 20th century, is disinfection. Most water suppliers add chlorine or another disinfectant to kill bacteria and other germs. Water suppliers use other treatments as needed, according to the quality of their 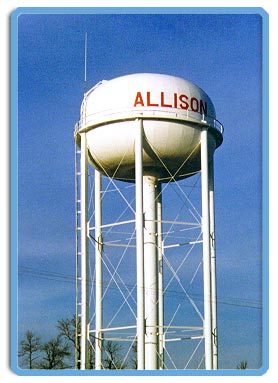 source water. For example, systems whose water is contaminated with organic chemicals can treat their water with activated carbon, which adsorbs or attracts the chemicals dissolved in the water.

What if I have special health needs?

People who have HIV/AIDS, are undergoing chemotherapy, take steroids, or for another reason have a weakened immune system may be more susceptible to microbial contaminants, including Cryptosporidium, in drinking water. If you or someone you know fall into one of these categories, talk to your health care provider to find out if you need to take special precautions, such as boiling your water. Young children are particularly susceptible to the effects of high levels of certain contaminants, including nitrate and lead. To avoid exposure to lead, use water from the cold tap for making baby formula, drinking, and cooking, and let the water run for a minute or more if the water hasnt been turned on for six or more hours. If your water supplier alerts you that your water does not meet EPAs standard for nitrates and you have children less than six months old, consult your health care provider. You may want to find an alternate source of water that contains lower levels of nitrates for your child.

What are the health effects of contaminants in drinking water?

The EPA has set standards for more than 80 contaminants that may occur in drinking water and pose a risk to human health. EPA sets these standards to protect the health of everybody, including vulnerable groups like children. The contaminants fall into two groups according to the health effects that they cause. Your local water supplier will alert you through the local media, direct mail, or other means if there is a potential acute or chronic health effect from compounds in the drinking water. You may want to contact them for additional information specific to your area. Acute effects occur within hours or days of the time that a person consumes a contaminant. People can suffer acute health effects from almost any contaminant if they are exposed to extraordinarily high levels (as in the case of a spill). In drinking water,microbes, such as bacteria and viruses, are the contaminants with the greatest chance of reaching levels high enough to cause acute health effects. Most peoples bodies can fight off these microbial contaminants the way they fight off germs, and these acute contaminants typically dont have permanent effects. Nonetheless, when high enough levels occur, they can make people ill, and can be dangerous or deadly for a person whose immune system is already weak due to HIV/AIDS, chemotherapy, steroid use, or another reason. Chronic effects occur after people consume a contaminant at levels over EPAs safety standards for many years. The drinking water contaminants that can have chronic effects are chemicals (such as disinfection by-products, solvents, and pesticides), radionuclides (such as radium), and minerals (such as arsenic). Examples of these chronic effects include cancer, liver or kidney problems,or reproductive difficulties.

Who is responsible for drinking water quality?

The Safe Drinking Water Act gives the Environmental Protection Agency (EPA) the responsibility for setting national drinking water standards that protect the health of the 250 million people who get their water from public water systems. Other people get their water from private wells which are not subject to federal regulations. Since 1974, EPA has set national standards for over 80 contaminants that may occur in drinking water. While EPA and state governments set and enforce standards, local governments and private water suppliers have direct responsibility for the quality of the water that flows to your tap. Water systems test and treat their water, maintain the distribution systems that deliver water to consumers, and report on their water quality to the state. States and EPA provide technical assistance to water suppliers and can take legal action against systems that fail to provide water that meets state and EPA standards.

What is a violation of a drinking water standard?

Drinking water suppliers are required to monitor and test their water many times, for many things, before sending it to consumers. These tests determine whether and how the water needs to be treated, as well as the effectiveness of the treatment process. If a water system consistently sends to consumers water that contains a contaminant at a level higher than EPA or state health standards or if the system fails to monitor for a contaminant, the system is violating regulations, and is subject to fines and other penalties. When a water system violates a drinking water regulation, it must notify the people who drink its water about the violation, what it means, and how they should respond. In cases where the water presents an immediate health threat, such as when people need to boil water before drinking it, the system must use television, radio, and newspapers to get the word out as quickly as possible. Other notices may be sent by mail, or delivered with the water bill. Each water suppliers annual water quality report must include a summary of all the violations that occurred during the previous year. For more information call the Safe Drinking Water Hotline at 1-800-426-4791.

How can I help protect drinking water?

Using the new information that is now available about drinking water, citizens can both be aware of the challenges of keeping drinking water safe and take an active role in protecting drinking water. There are lots of ways that individuals can get involved. Some people will help clean up the watershed that is the source of their community’s water. Other people might get involved in wellhead protection activities to prevent the contamination of the ground water source that provides water to their community. These people will be able to make use of the information that states and water systems are gathering as they assess their sources of water. Other people will want to attend public meetings to ensure that the community’s need for safe drinking water is considered in making decisions about land use. You may wish to participate as your state and water system make funding decisions. And all consumers can do their part to conserve water and to dispose properly of household chemicals.